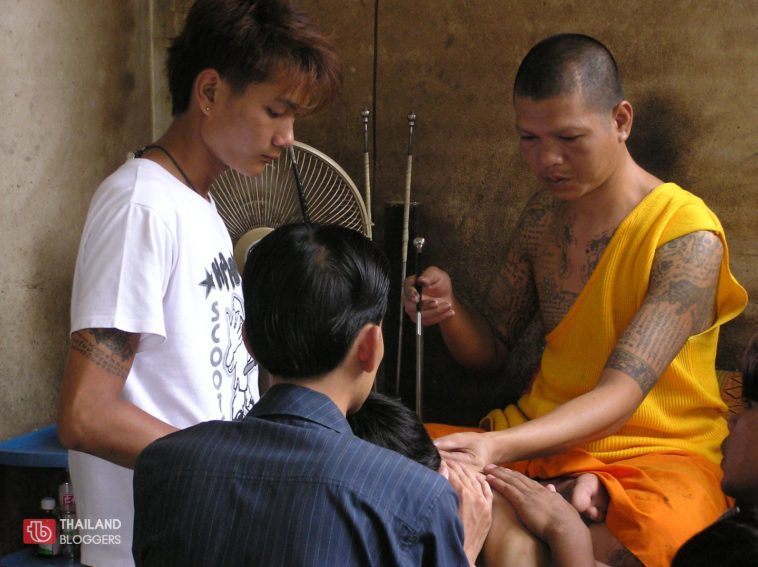 In no other country in the world except Thailand does the tattoo tradition have an annual religious celebration. Once a year, thousands of tattoo enthusiasts from around the world descend on the temple known as Wat Bang Phra, located 50 km outside Bangkok, where dozens of heavily tattooed Buddhist monks are masters of the tattoo art. This Wat is also known as the Temple of the Flying Tiger. Unlike most tattoos in the West, the Thai version comes steeped in spiritual, or some might say superstitious, meaning. Protection, good luck, blessings from on high — these are what the tattoo devotees are seeking. Many arrive already heavily tattooed and are there to simply get their designs ‘recharged’, by having the Buddhist monks re-bless their body art.

During the festivities it is not uncommon for the tattoo devotees, through their chanting, to reach an extremely heightened state of consciousness, appearing to enter into a trance. Everyone arrives with gifts of incense and flowers for the tattooist’s venerable teacher.

It’s a long tradition in Thailand for soldiers to take on these protective tattoos, called Sak Yant. The belief in their powers as charms is so great that it’s commonly believed that the right tattoo by the best tattoo master can stop bullets. It’s not only the Buddhist designs that are potent, but the accompanying prayers. They’re chanted by the monks as the nearly metre-long tattoo implements do their work. The fingers of one hand directs the needle, cradling the tip almost as if it were a pool cue, while the other hand drives the needle up and down. The monk’s wrist is a blur as he rat-a-tat-tats the needle in and out of the skin, two or three times per second. The resulting series of connected dots in the skin resemble an embroidered tapestry. Yes, the hand-tapped tattoos are painful, but it’s a fair exchange if you believe that you walk away from the experience invincible.

Another technique involves the tattooist’s needle penetrating the skin, after which ink is rubbed into the wound and a prayer spoken to impregnate the charm with its spiritual power.

There are hundreds of traditional Thai designs, many of them animals, the tiger being the most popular. The lower back is the preferred location for this most powerful of motifs. Taking a tiger tattoo is to take on the tiger spirit, a spirit that will be in control of your life. Angelina Jolie submitted to the classical tiger treatment at the hands of venerated tattoo master, Ajarn Noo Kanphai in 2004.

The most popular Thai tattoos depict Buddhist deities or temples. Often, the tattoo is not a recognizable image at all, but Thai script reproducing prayers. Sometimes it’s a yantra, a pattern much less graphic than a tiger, and composed of dots.

Thai traditionalists would warn tattoo enthusiasts that ordinary ‘decorative’ tattoos have no power to protect or bless them. Decorative tattoos in the traditionalist’s eyes are executed using modern electric machines in the hands of tattooists with little true feeling, and consequently the tattoos lack authority and integrity. Mainly, they are perceived to lack magic. Such tattoos would have little power to act as a protective amulet or talisman or to bring good fortune to the wearer.

The art of spiritual tattooing as practiced in Thailand is one that goes back to ancient times. Like the classical Japanese tattoo masters, the Thai monks undergo the long training necessary to find that mystical place inside them where they aren’t distracted. Only in that state — and working from that very still place — can the tattooist orchestrate his mind, body and heart into the necessary coordination to perform the tattoo miracle. It not only takes a monk to recite the appropriate sutra — there are at least 108 of them — it takes a person whose heart is purged of his own agenda and egocentricity. Only then will the tattoo be a pure design, able to answer the wearer’s prayers.

Of the various Thai tattoos said to attract luck, wealth and blessings — as well as provide a measure of insurance against evil spirits — the traditional Buddhist tattoo is very popular. It’s usually a geometric design based on images of the Buddha, Bodhisattvas, the Lotus or some other Buddhist symbol.

The Thai also have a Hindu Sanskrit tattoo that performs much the same function, except that it’s based on Hindu gods and deities, such as the Four-faced Buddha, Hanuman the Monkey God, and the Holy Eagle, the Heavenly Dog, the Thai Dharma King, and a Wealth Deity who is female. These are fearsome creatures, in the face of which most evil spirits are said to quickly retreat.

For luck, wealth and blessings there’s another tattoo option — one of the Thai Lucky Holy Icons, like the tiger or dragon, the phoenix, lion, leopard, snake, etc. These animals are both holy and lucky, but aren’t complete as a tattoo unless they’re surrounded with appropriate mantras and yantras and applied by a monk chanting the sutras. Don’t try this at home — and expect to deflect bullets.

There’s even a special Thai tattoo to improve your interpersonal skills, or perhaps it’s your relationship skills — called the Golden-Tongued Bird ‘Sha Li Ka’. They say it improves your confidence and speaking skills, and it better work because it must hurt — it’s applied to the tongue. Not so painful is the tattoo inked onto the top of the back of the head and intended to ‘flood your head with blessings to protect your soul’. This is the ‘Yuan Shen Guan Ding’ tattoo. The soul is said to reside up there, right alongside one’s store of good luck, and also our potential for success in business and relationships.

Thai tattooing has adapted to modernity with typical Thai finesse and subtlety. For those who fear that their tattoos may not be well-received in an office modeled after its Western counterparts, Thais may get tattoos not with the usual tattoo inks but with sesame oil. Or even no pigments of any kind. The tattooing implements, the designs and the mantras are all the same. The result, however, for all intents and purposes, is an ‘invisible’ tattoo, with none of the the visible stigma of a tattoo, but with all its magical powers to protect as an amulet and talisman intact.

For attracting special wealth, the Thai have hand tattoos. Pieces of 24K gold flake inscribed with the wearer’s personal data are hand-pricked into the palm. Perhaps the origin of the, ‘golden handshake’? 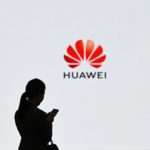 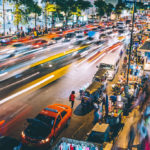