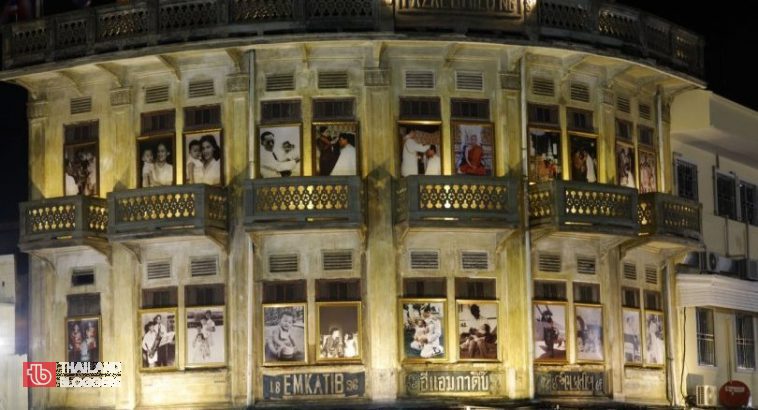 A series of 22 photos depicting His Majesty’s life from childhood to his teenage years adorn the Fazal Building located at the corner of Asadang and Bamrung Meang Roads in Phra Nakhon district. /Prasert Thepsri

People living along the roads designated for the royal procession are excited and feeling fortunate that they will have an opportunity to get the first glimpse of their newly crowned monarch in person on Sunday.

Decorations adorn many houses and buildings on Rattanakosin Island, lining the route of the Liap Phranakhon Royal procession, as people prepare to celebrate this once-in-a-lifetime spectacle.

With help and funds from City Hall for renovation and decoration, properties along the route look new and lively, as they have been prepared to join the rest of the nation to celebrate the coronation.

Portraits of His Majesty proclaiming “Long Live the King”, along with yellow flags sporting the royal emblem, can be seen everywhere along the streets.

“I’m now 63 and I never thought that I’d have an opportunity to witness this once-in-a-lifetime event, so I’m so happy,” said Salinee Utthahirankul, a grocery shop owner on Phra Nakhon district’s Feung Nakhon Road.

Salinee, who moved from Thon Buri 15 years ago and rented a shop on the road, said she would not have witnessed the precious moment had she not lived on the road.

On Sunday, when the royal procession takes place in which HM the King will be carried in a palanquin by soldiers, Salinee will take her 88-year-old father to the frontlines to watch.

She has also prepared a photo of the King for her father to hold while waiting for the procession to pass her shop.

While many shops are decorated with yellow flags and portraits of the King, one building stands at a corner of Asadang Road and Bamrung Mueang Road, attracting bystanders not only for its old structure and classic architecture but also for displaying a series of photos of His Majesty’s life.

The three-storey building is currently under renovation, with its owner’s identity carefully protected by the contractor.

Mana Aubattikrn, contractor and caretaker of the building, said that while renovating the building, he was approached by Phra Nakhon district director Wuthichai Boonsith who wanted to decorate the building for the coronation.

“The director gave me those photos from his personal budget. I put them on the old wooden window shutters on the second and third floors, and now the building looks so striking,” Mana told The Nation proudly.

The 22 photos depict King Rama X from his childhood to adulthood.

Built in 1896 during King Rama V’s reign, the edifice was named the Fazal Building and housed the EM Katib department store in those days, Mana said. The store sold cut-glass containers, porcelain and perfumes imported from Europe.

Mana said his boss had acquired the building three years ago and planned to turn it into a cafe. Once the renovation is completed, he plans to display all the King’s portraits on the second floor for young generations to see and know their history.

His boss also owns four units of two-storey shophouses on Feung Nakhon Road near Wat Rajabopidh. These houses are 132 years old and now sport eight images of the King as part of the coronation celebration, Mana said.

The coronation of the 66-year-old monarch will run from tomorrow through Monday and is considered to be the most important events of the year in Thailand.

It is the first coronation in 69 years, since His Majesty’s revered father King Bhumibol Adulyadej – who passed away in 2016 – formally took the throne in 1950.

Hundreds of thousands of people are expected to attend the historic event, capping a weekend of coronation ceremonies.

Forty roads around Rattanakosin Island are closed to traffic until Monday. While shops along the route are allowed to open for business as usual, they have been asked by the authorities to keep their display neat and clean in honour of the event.

They have also been asked to stop making any noise, including turning on air-conditioners, as it may frighten the horses in the procession.

Thiwawan Songsaeng, a 48-year-old shop caretaker, said her massage shop on Feung Nakhon road will be open for business on the day, adding that since the procession will pass by quite late in the evening, she will be able to watch it.

She added that the authorities have said the staff in the shop can wear their uniforms as usual, and that it was not necessary to dress in yellow.

Kontee Subpradisth, the 55-year-old owner of a Buddhist supplies shop on Bamrung Mueang road, said he was delighted and felt lucky that he will get to witness this once-in-a-lifetime event. Like everyone else, he too has placed the King’s portrait outside his shop, and since it’s on the corner of the road, he said he will be at hand to provide assistance to anybody who needs it.

The royal procession will leave the Grand Palace at 4.30pm on Sunday and circle around the historic old quarter, giving the people a chance to pay homage to their new monarch.

The procession will take a 7-kilometre route from the Grand Palace, stopping at Wat Bovoranives, Wat Rajabopidh and Wat Phra Chetuphon (Wat Pho), and is expected to take around six hours. The King will disembark the palanquin at these temples to pay his respects at the main ubosot and to the ashes of his ancestors. 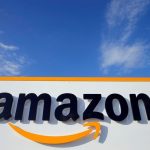 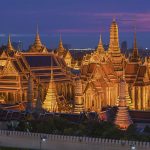